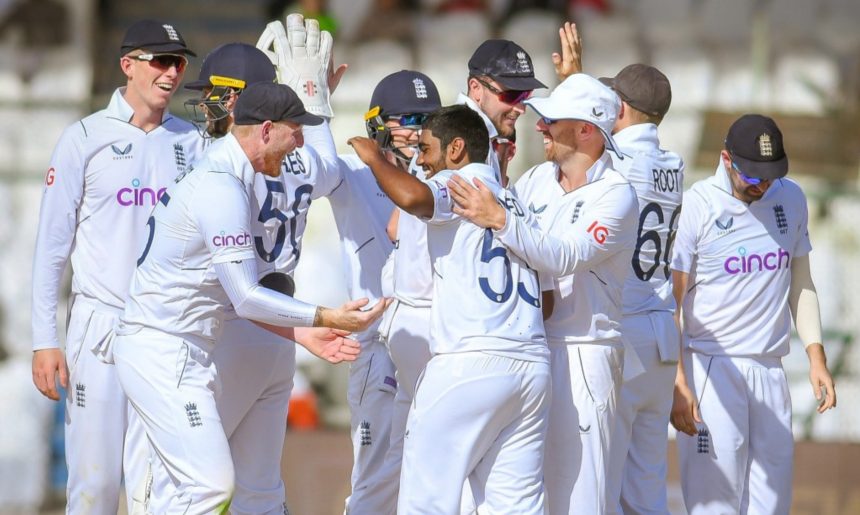 Spinners dominate with England on Top after Day 1 in Karachi:

The third Test match of the series and the last too. England already has the series to their name but it is pertinent for Pakistan to win this one to avoid what would be the first ever clean sweep in home conditions for them. A record Babar would not fancy having in his bag and so he made four changes to the team. With Nauman Ali, Mohammad Wasim Junior, Azhar Ali and Shan Masood in the playing XI, Mohammad Nawaz, Zahid Mehmood, Mohammad Ali and Imam ul Haq were made to sit out. For the English, James Anderson and Will Jacks warmed the bench while debutant Rehan Ahmed and Ben Foakes entered the field with the three lions jersey.

Babar’s toss curse ended and he won the toss for the first time in the series at his favorite cricketing venue National Stadium Karachi. Pakistan opted to bat first knowing that the deck was dry and flat.

Abdullah Shafique, the young opener, scampered towards the field with Shan Masood, who got a chance in the team after 2 years and his decent outings for Derbyshire this year. Ollie Robinson came in galloping to bowl to Abdullah, who was at the crease. The over ended with a boundary and a fist bump between both batters. Jack Leach shared the ball with Robinson, which was quite unorthodox for England as none of their spinners since 1921 has done the same. Leach was hit for two fours off two balls by Shan. Pakistan started in a good touch but did they take this form further? Let’s see. Robinson and Leach continued for 5 overs with Pakistan offering time to time boundaries.

In the 5th over, Jack Leach struck Abdullah on pad following which an enthusiastic appeal from the visitors made the Umpire raise the finger. The Pakistani batter reviewed it just to see the ominous and unlucky yellow bar which referred to Umpire’s call. Pakistan lost their first and one of their key batters. Out came Azhar Ali for the second last time in whites. Mark Wood was brought in by the English in place of Robinson who left the field citing an upset stomach.

Took Azhar Ali 11 balls to get off the mark and he joined Shan Masood in building a partnership. A partnership which Pakistan needed more than oxygen to script a good innings total on this batting-friendly pitch. Just when it looked like the Southpaw Masood was here to stay and take a pile of runs home today, Wood burst the bubble and bowled a 90 mph short delivery. Shan attempted to pull it but failed and a top-edge was followed by screams from the English on field. Jack Leach standing at fine leg reacted to the screams and caught the ball. Shan went in with 30 next to his name and in came the Skipper, Babar Azam, amidst chants of his name.

No change in the bowling combination from Ben Stokes was seen until the end of 16th over. That’s when the man – or maybe the boy – everyone had been waiting for took off his jersey. Stokes gave the bowl to Rehan Ahmed, England’s youngest debutant in Test cricket. The rookie tweaker conceded 7 runs to start with. At this point, England was making two spinners bowl while Pakistan’s most experienced batters were in the ground. After a while Ollie Robinson returned both to the attack and to the field to control the runs which were flowing at the rate of 4.50. This reintroduction proved to be fruitful for England as in his second over after returning Robinson ended Azhar Ali’s innings with Foakes taking a brilliant catch behind the stumps. The teams went for Lunch while Pakistan sat at 117/2 in 25.2 overs.

Second session started after players came to the field once again. Babar Azam was joined by Saud Shakeel, who has been clinical throughout this series. Robinson was joined by Leach and Babar stayed on the crease as a dangling sword on the visitor’s head. Saud too, intoxicated with the contagious energy and confidence induced by Babar, took advantage of every chance he got to hit the ball. Scoring rate stayed nearly 4.5 and Wood was brought into the attack for the first time after the lunch.

Pakistan steered smoothly towards 150 while England’s spinner and quick combo kept on bowling in turns. Rehan Ahmed came in again for his second spell but Pakistan remained unbothered. Babar’s 50 came up and Pakistan were soaring. However, not for long. Rehan struck his first timber and Saud Shakeel had to leave the field. The left hander tried to defend the debutant’s leg spin but the ball hit the edge of the bat, landed on the pad and bounced upwards. Ollie Pope, standing at short leg, ran in a little and took an incredible catch. Out walked Shakeel with his first below 50 score so far.

Mohammad Rizwan came in next and opened his account by hitting a four. Jack Leach and Rehan Ahmed stayed with the ball and England needed to break the pair before a partnership was established between them. Joe Root came in the place of Jack Leach and continued with Rehan. By the end of 47th over Pakistan were cruising comfortably at RR of 4 and 190 runs in their bag. Two of their best batters were on the crease and England needed a timber. A few balls later, Mohammad Rizwan presented his wicket to end the tourists’ worries. He came down the track, converted Root’s length ball into a full toss. This could have been heroic, had he not misjudged the ball. The misjudgement made the ball land in the hands of the English Skipper, who like everyone else, was flabbergasted but grateful to Rizwan for his hospitality.

Salman Ali Agha was the new man in for Pakistan, while Wood came back for England. Babar was on crease, things for Pakistan were still under control and Pakistan crossed the mark of 200. By the time, Tea Break ended the session, Pakistan were at 204/5 with Babar and Salman, two proper batsmen on the crease.

The last session of the day started with the ball in Mark Wood’s hand who ran in to bowl to Babar Azam, who was becoming dangerous with every ball. Rehan Ahmed was asked to continue from the other end after Stokes saw Salman Ali Agha struggling a little against variations in Ahmed’s arsenal.

Babar was making no mistakes and playing every ball after reading it carefully. Unluckily, his running made him take the long walk back to the pavilion. After a hesitant single he ran from the non striker’s end, Harry brook capitalized on the time Babar’s hesitancy took and threw the ball to wicket-keeper who struck the stumps cruelly sending Babar back, livid at what happened to him. England with one blow sent Pakistan to panic mode. Fans started leaving the stands. Faheem Ashraf came striding in and Leach bowled after the over in which Babar was dismissed. Flow of runs became slower while a couple of appeals full of zeal were turned down by the umpire. 65 overs ended and Pakistan were at 231 for 6 wickets down. In the 67th over, Ashraf was dismissed by Rehan Ahmed’s googly. The batter reviewed it and the review went down the drain with a plumb LBW on screen.

Nauman Ali, the new inclusion, came in and started hitting from the get go. Another review by the English was wasted in their attempts to get Nauman and a run-out chance went in vain as well but he stayed to play a 24 ball 20 knock. Salman Ali Agha, a little while after his departure, reached his 50 while the first timer Mohammad Wasim Junior came in at 10th. Wasim hit a six to get off the mark in action. His first ever Test runs came off a six which resonates with the kind of character he himself is. Salman stayed with the newcomer for a few balls more and in his attempt to hit Leach for maybe a boundary, went down the track. The ball ran past him and Foakes reacted quickly by stumping him. 9th fell for Pakistan and the magician, Abrar Ahmed, came in. Abrar struck wood for a one bounce four and got out the next ball. The first innings for Pakistan ended at 304 runs with a few overs of the day still remaining, which heralded that English batters will make a return wearing their batting kit.

Zak Crawley and Ben Duckett came holding the bat in the ground wearing all their protective gear. Pakistan team followed them and Abrar Ahmed was asked to bowl first. The magician on his 5th ball got a strike to his name and showed the World how it’s done. So far, the young spinner has never bowled a first over in which he did not get a wicket. Sounds like a record a Pakistan bowler would have. Leg before Wicket it was and the ball struck his back pad. The LBW was so plumb that Zak Crawley, the victim, did not even review it. Ollie Pope came in and the ‘Nighthawk approach’ was temporarily binned. Nauman Ali continued from the other end and a loud appeal added to England’s worries. Umpire did not look interested and Pakistan after discussing it for a while did not go upstairs.

A similar call was made in Abrar’s next over as well with Duckett on strike and Babar went for the review this time after Ahsan Raza, the on-field umpire, shook his head. The review went wasted as the ball was shown to be pitching outside the leg stump. With this the day’s play ended. England will spend the night at 7/1 and Duckett and Pope will initiate the second day tomorrow. 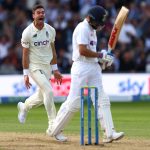 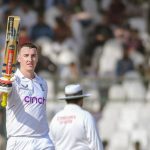