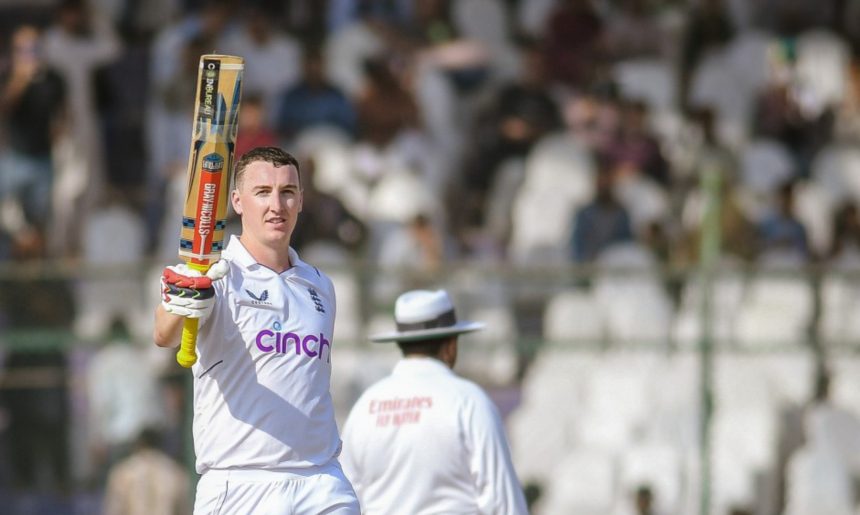 Brook’s Century dents Pakistan as they now look to set a formidable target for England:

England went back on Day 1 at 7/1 with Ollie Pope and Ben Duckett at crease. The second day began and Pakistan’s 11 men and England’s two came striding in towards the field. Babar Azam was not one of those returning owing to him feeling a little unwell. Rizwan was given the duty to call the shots and so he handed the ball first to one of the only two pacers of Pakistan lineup, Mohammad Wasim. The young pacer was joined by the mystery spinner Abrar Ahmed, however, Wasim was soon sent out of the attack following his unruly line and length which cost him and Pakistan 19 runs in two overs. Faheem replaced him and he too was not called back again despite conceding only 2 runs in his over. Rizwan fancied spinners from both ends for which the veteran Nauman Ali was handed the ball to roll his arm over this tricky pitch.

Abrar Ahmed took a beating in one of his overs but the English batters were immediately reprimanded by his fellow tweaker, Nauman Ali, in the next over. England was resting at 58/1 and then the left-armer came to turn the tides by bowling two brilliant deliveries which got Pakistan rid of the opposition’s two main batters. On the first, with Duckett on strike the ball delivered by the veteran spinner pounded him on the knee. A huge appeal was made by the keeper Rizwan and the bowler to which Umpire responded with a raised finger. Duckett, suspecting the decision, went upstairs to the third umpire but to no avail. The Umpire’s call signal under the strip of impact saved England’s review, which was the only good thing which happened for the visitors in that over. After his departure, Joe Root was seen standing at the crease but his modicum stay was ended by Nauman, again, who struck him out on the very next ball. The bowl was delivered outside off by Nauman which brought Root forward to defend it but the outside edge had the ball ending up in a calculated catch in Salman Ali Agha’s hands, who was moved to stand at Slip position just a few moments ago. 2 England batters were down on 2 balls. Although Nauman could not convert these two wickets into a hat-trick, he did significant damage to the England team. Harry Brook walked in next, another dangerous batter from the English side.

Nauman Ali and Abrar Ahmed continued bowling for Pakistan for a good part of this session. Babar returned to the field further bolstering Pakistan’s morale. Ollie Pope was lurking near 50 runs and the runs were flowing at more than 4.5 per over, majority of which came in Abrar’s overs. Ollie Pope reached his fifty by hitting a four to Nauman Ali. If Pope had plans of converting this 50 to a triple-figure it was smashed into smithereens by a peach of a delivery by Abrar Ahmed. Jaffa, you may call it, but it was sweeter than any fruit on the planet for Pakistan. The ball hit the upper part of the off stumps and produced the distinctive voice of leather on timber. With this Abrar drew his first blood of the day. England slid down deeper into trouble. The man of crisis, Ben Stokes walked in next and Brook welcomed him with a six off Abrar’s ball which was hit over the long-on and England reached 100 runs. Nauman and Abrar were still juggling the ball between them, pacers were resting while waiting for the reverse to come and the ball to get old.

By the end of 27 overs, England had 120 runs and 6 wickets in their pocket. A change was made and debutant Wasim was called in to replace Abrar. Nauman and newly brought in Wasim continued till the end of the session and Stokes made sure to make the most of the time before Lunch by hitting boundaries frequently. Lunch was served and teams went back. The scoreboard read 140/4.

Abrar continued after Lunch and Mohammad Wasim shared the ball with him. A mayhem between the wickets took place after which the crowd saw Wasim Junior hitting the stumps to run Ben Stokes out. Following is how it happened; Brook flicked the ball delivered by Wasim through mid-wicket which after a chase by Azhar Ali was stopped just near the advertising toblerones in the deep. The young batter made a call for the third following which Stokes nearly reached the middle of the strip only to find Brook drawing backwards as well. The Pakistani pacer casually struck the stumps and the Skipper was made to leave the field but did not do so before consoling his young knight with a thumbs up signal and few words of encouragement to lessen his guilt.

Ben Foakes came in next and it was the first time he did so in this series. Mohammad Wasim and Abrar Ahmed continued and it took Harry Brook some time to get over what happened earlier. Fifty came up for him just a few balls later, while Foakes tried to settle in. In 39th over, Abrar tried to add some entertainment to the match and struck Foakes’s pad which made the ball bounce in the air and finally in the hands of the fielder at short leg. Appeal followed it and Umpire raised his finger for LBW. The lucky Foakes reviewed the decision and ended up saving both his wicket and the review, as the third umpire noted the ball to be missing the leg stump. This survival marked the beginning of a fiery innings by the Wicket-keeper batter.

Nauman Ali was brought back in to replace Abrar Ahmed while Wasim stayed to bowl from the other end. Faheem Ashraf, the second pacer, was still not in sight. Both, Brook and Foakes, stuck to their grounds like walls and did not err even for a second. Partnership was building between them and it was the last thing on the planet Pakistan wanted. 50 overs ended and England stood just 99 runs behind Pakistan’s score. 205/5 it was and Run rate was just a modicum above 4. The host bowlers were sweating to get a breakthrough. With only 4 bowlers in Babar’s arsenal, there was no fancy strategy to try to trap the bowlers. To everyone’s astonishment, Faheem Ashraf was still not given the ball. Amidst this struggle for Pakistan batter, Harry Brook, the highest run-scorer of the series so far, reached his century. His 3rd in the series. Salman Ali Agha was made to bring the change just before tea, who gave 5 runs and then ran off with his team for the Tea break. England were 254 for the loss of 5 wickets and exactly 50 runs behind Pakistan. Pakistan bowlers were scratching their heads and thinking of ways to get a breakthrough here which was becoming everso necessary.

Tea ended and Nauman came to bowl with Foakes on crease. Abrar was recruited from the other end but replaced by Wasim Junior just after 1 over. This proved to be useful for Pakistan because Wasim thumped Brook’s pad ending his fine innings. Brook walked back and on a second thought tried to review the decision but was too late to do so. In walked the debutant Rehan Ahmed carrying a decent batting average from First class. Using his fearless approach, he struck the ball to get off the mark but his attacking approach haunted him in the next over after Saud Shakeel standing at mid-wicket took a blinder off Nauman Ali. English lost their 7th. Foakes reached his fifty in the next over while Wood joined him. The fast bowler decided to do Rehan’s job as well as he did not look back while hitting bowlers all around the park. Whether it was Bazball or quick outfield, Mark Wood and Foakes started raining boundaries and reached at par with Pakistan’s first innings total in the 74th over. Although Abrar Ahmed claimed the timber of Wood on the back of Abdullah Shafique’s catch, the job, by the quick, was done. England were leading by 12 runs and Ollie Robinson came in, who like his predecessor did not show the bowlers any mercy. Foakes went back throwing the 9th wicket in the next over on the ball of Nauman Ali, as his 4th victim of the day. Abdullah Shafique it was again who took a relatively easy catch this time.

Second new ball was taken by Pakistan to get the last wicket as early as possible. Abrar was given the new cherry and the trick worked as the magician bowled Robinson out, claiming his 4th wicket of the innings. England’s first innings ended with a lead of 50 runs and now it was the time for Pakistan’s batters’ test.

On just the second day of the Test match, Pakistan’s second innings started. Do people still have the audacity to claim that Test cricket is boring? Abdullah Shafique came in with Shan Masood while only a few overs of the day’s play remained. Leach opened for England and started with a maiden over. Another spinner, Joe Root was inducted at the other end. Slow flow of runs came but Pakistan batters protected their wickets Scoring rate stayed religiously below 2. Rehan Ahmed was introduced soon and shared the ball with Jack Leach till the closure of day’s game. Pakistan cruised safely towards the end of the day. With 21 runs in their possession and 10 wickets in hand, Pakistan batters went in with the plans to enter the field tomorrow to bring on board something for their bowlers to defend. 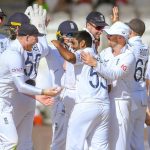 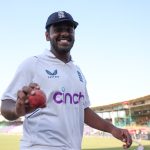