The Optus Stadium at Perth awaits to host the 24th fixture of the tournament between Pakistan and Zimbabwe on 27th October. Both of the aforementioned nations are eyeing to get points from this game.

Keeping in mind what happened for Pakistan on Sunday at the G, the men in green will be looking to compensate for the lost points and negative NRR, in their outing against Zimbabwe. Despite losing the match against India, the Pakistan team still continues to be a threat for its opposition, which is quite right in a sense that Pakistan has the second highest number of wins in T20is. The cornered tigers baffled the New Zealand team in the tri-nation series final earlier this month. What makes them one of the favourites for this World cup is their pace unit, which is one of the bests, if not the best in the World. Pakistan has as much as 5 in-form pacers who can utilize the conditions of pitches down under for their own ends.

Zimbabwe played a rain-curtailed match against South Africa, which was later on called off. Both the teams got 1 point each, the Chevrons, however, know that rain will not always come to their rescue. In order to survive in the race to reach the next round, the Craig-led men will not only have to defeat their group fellows but also have to do so by a big margin, so as to increase the NRR. Keeping the performances of associate nations so far in the marquee event in context, it is quite possible for Zimbabwe to override Babar’s men or any other team of full member nations.

Pakistan and Zimbabwe have never encountered each other in T20 World cups so far. This match will be their first clash of the T20 World cup. However, as a part of bilateral series, Pakistan has played 17 matches against Zimbabwe winning 16 of those. Zimbabwe was victorious only once which was in the second T20I of the three-match tour of Pakistan in Zimbabwe.

The skies of the Optus Stadium in Perth will be covered in clouds, however, as per the forecast by the Bureau of Meteorology there is almost negligible chance of rain in Perth on Thursday. Winds are expected but the weather will remain pleasant for the match.

Just recently, the clash between Sri Lanka and Australia was staged in the Optus Stadium. The pitch was seen, during the match, giving off a true bounce and quick outfield as usual. This makes Perth a belter of a pitch. The hard surface here helps the batters to manoeuvre the ball towards boundaries easily. The boundaries are comparatively smaller too, especially the straight boundaries, which explains why the boundary percentage in the Optus Stadium is more than 57%. With this, a high scoring match is definitely on the cards at the Optus Stadium.

Pacers generally term the generous bounce and pace of the pitch as their ally in destroying the batting lineups of the opposition. Pacers will find short deliveries very much effective on a pitch like this.

Pakistan are in need to win the match to collect their maiden points and make the NRR better. To achieve this, Babar’s fiery men will go beyond any limit.

The pace and bounce of Perth will definitely favour the side with quality pacers. While the Zimbabwe team has some decent pacers like Blessing Muzarabani, Tendai Chatara and Richard Ngarava, the pace attack of Pakistan has an obvious dominance over the Chevrons.

Furthermore, the in-form top order and middle order of Babar-led men has strengthened the batting lineup of Pakistan to a fine level. This combination on the soil of Perth will succour the Pakistani team, making them the favourites for the match against Zimbabwe.

Mohammad Amir dissects the reasons behind Pakistan defeat
Next Article 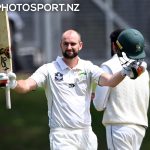