Plenty of Drama on the Final Day in Karachi | Pakistan vs New Zealand Test:

The last day of the Boxing Day Test and the last day of international cricket in 2022 began in Karachi with the scoreboard reading 77/2 next to Pakistan’s name. Host team’s night watchman, Nouman Ali and Opener Imam ul Haq came to the ground to begin the ending of the game. Michael Bracewell bowled with Imam on strike while Southee decided to come around the wicket from the other end. A four off Southee added to Imam’s score of 44 which was left simmering overnight, finally bringing him to his 50. In his next over, Bracewell hoodwinked the nightwatcher Nauman Ali and hit the ball on his front pad which looked like a plumb LBW. Nauman had no answer to it and so he walked away to let Babar come in at his place. Babar’s stay, however, was short. Way shorter than the duration he fancies. Although, he did please spectator’s eyes with two beautiful drives but as soon as Ish Sodhi came and as soon as he decided to bowl a wrong one, Babar’s wicket fell. Babar reviewed it but it did nothing good for him. The skipper departed after a short course and in came Sarfaraz with a deficit of 74 runs still on board.

New Zealand looked very much in the game and with Babar gone problems for Pakistan grew exponentially. Sarfaraz who misunderstood the game for a t20 match, started hitting from the word go. Southee brought another spinner in his place, Ajaz Patel, but that did not help the Kiwis either because Sarfaraz was firing on all guns. Ish Sodhi and Ajaz Patel continued bowling from both ends and flow of boundaries became fewer but runs were still flowing smoothly. The 5 day old pitch looked to be favoring spinners who were getting big turns. As the 55th over ended, Pakistan were only 20 runs short of NZ’s tally and the run rate was 2.8, with 6 wickets in Pakistan’s hands. Neil Wagner replaced Ajaz Patel a few overs before lunch. What shook the viewers awake was an LBW appeal by Sodhi with Imam on crease. Umpire turned it down and Southee reviewed. The replay showed the ball spinning a great deal which unluckily made the ball miss the stumps. Review was lost and Imam stayed on the crease. Pakistan crossed the 174 runs lead of the Southee-led men and now they had to score to put up a decent target.  Sarfaraz was nearing his 50 and Bracewell came to bowl the last over before lunch which, due to Friday, started at 12:30pm. Sarfaraz went for lunch at 49 not out and the first session of the day ended. The game was most likely going in the direction of a draw but the way both teams were playing, anything looked possible. The first session was somewhat owned by both the teams.

The second session of the day began after an hour instead of the usual 40 minutes. In came the black capped team and two batters with star emblems on their chest. Southee again started the session and Sodhi joined him from the other side. Sarfaraz, who was already tired of waiting to reach his 50, hit Sodhi for a four and reached his second fifty of the match. Sodhi, however, reprimanded Sarfaraz on the very next ball. Sarfaraz tried to make it to the wide ball by Ish Sodhi and a faint tickle followed by an easy catch by Blundell made him pay for his audacity. Sarfaraz departed and Salman Ali Agha was sent in. Southee and Ish Sodhi remained bowling while Imam pushed his score into nineties. Bracewell was asked to continue with Sodhi by his Skipper and Ish Sodhi gave him a warm welcome by darting the timber of Agha Salman mysteriously. The delivery raced insidiously through the gap between Salman’s bat and pad and hit his wickets. Another fell for Pakistan and their last batter, Saud Shakeel, came out after being demoted in the order for tactical reasons. Imam was standing at 96 soon and was just a shot away from his century but Sodhi had other plans. Imam danced down the track to play Ish’s googly but the spin made the ball run past him and by the time he deciphered the danger, Blundell was done destroying his wickets. Livid Imam walked back and Mohammad Wasim came in.

The play went on going in a monotonous way for quite some time with Ish Sodhi and Bracewell bowling in turns and Saud Shakeel and Mohammad Wasim trying to survive and save the Test for their side. The runs were coming at 2.85 RPO but keeping the wickets safe was more important for Pakistan at that point. NZ took the new ball in between Sodhi’s over but the stand stood steadfast. The second session ended just like that as well. Pakistan’s wickets did not fall but runs did not come generously either. By the end of the 86th over, Pakistan were 75 runs ahead of the visitors.

The last session of the day began and Sodhi bowled to Mohammad Wasim. Wasim was not in the mood to show mercy and he was hitting one boundary per over, fearlessly, while Saud was still playing slowly and soberly. Sodhi trapped Wasim who was very near his first half century in Tests and an LBW appeal was followed by the Umpire raising his finger. Wasim Junior went for review and review showed Umpire’s call on impact. The 8th wicket fell for Pakistan and Mir Hamza came in next with Saud Shakeel on the other end.

It took Mir Hamza a few overs to get off the mark and the run rate which was sent higher than 3 by Wasim slowly declined. Ajaz Patel gave Mir Hamza one reprieve by missing a run-out chance. Saud Shakeel soon realized that he had a job to do and hit a few boundaries to enter his 40s. Finally by a four and a six, Shakeel brought up his fifty and Pakistan’s 300. The lead was now 126. A missed catch after Saud Shakeel tried to hit the ball in the air made the visitors very frustrated. The match was now more probable to end as a draw and the day was nearing its end. To everyone’s astonishment Babar with a big smile on his face, signaled his two men on the field to come back after the 104th over ended and Pakistan was at 311. The brave declaration set up a target of 138 runs for Southee’s men with only 15 scheduled overs remaining.

Players went in and came out instantly. Abrar Ahmed was given the ball and Michael Bracewell and Devon Conway came in to bat. Abrar on his 6th delivery thumped Bracewell’s wickets and for the first time during the day it looked like Pakistan could win the match as well. Salman Ali Agha came to join Abrar and bowled his first over of the match. After Abrar conceded 14 runs in one of his overs, Babar decided to bring a pacer. Mohammad Wasim Junior came to bowl in his place and he too was hit 13 runs in his over. Salman was denied the ball next and Mir Hamza was brought in. The light was decreasing and flood lights were lit. 7 overs ended and New Zealand were 59/1 with Run rate just a little shy of 8.5. 3 deliveries into the 8th over, Umpires huddled together with a light meter and decided that light had faded too much for the game to continue. Teams started shaking hands and the match was announced to have ended as a draw. 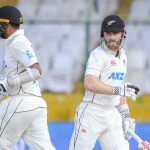 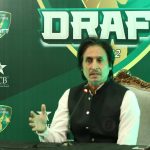