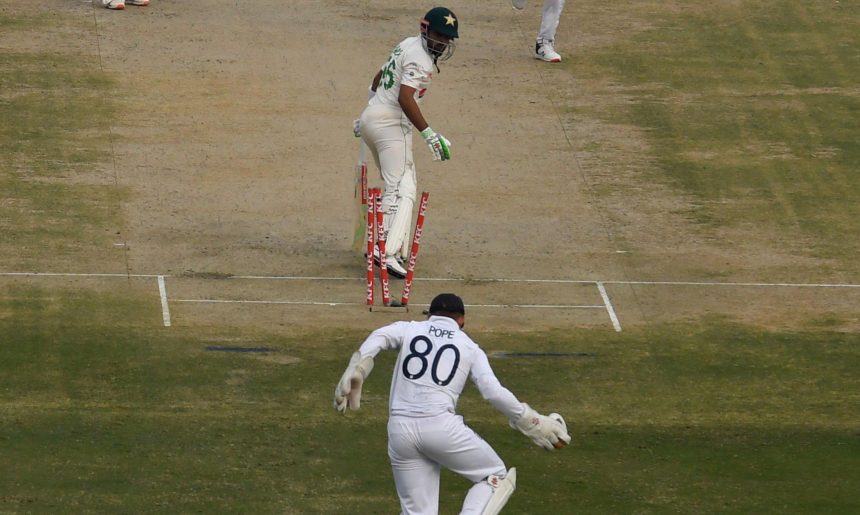 Pakistan ended the first day with a solid stand and the mighty Babar Azam and Saud Shakeel on the crease. The hopes to add a decent amount of runs to the 107 they scored before the first day ended, followed both batters to the crease as the second day began.

The day started with Babar Azam on crease and James Anderson bowling to him. A delightful sight for fans around the World. Jack Leach was brought in from the other end with Pakistani batters hitting the runs at nearly 3 per over. Occasional boundaries were hit by the Skipper and following his suit, by Saud Shakeel as well. The strong stand was further cemented by Babar leading from the front and Saud keeping up with him. The young left hander was soon rewarded for his guts with a half century, his second in Tests.

The clinical and steady run flow brought Pakistan’s tally to 142 by the end of 34th over. Thats where Ben Stokes decided to unleash his hitherto concealed weapon; Ollie Robinson. Robinson bowled with Babar at the strike, but did not have to wait for long to break the partnership and delivered an absolute peach to claim the inestimable wicket of Babar Azam.

In came Rizwan at number 5 after the huge blow to Pakistan’s batting lineup. Jack Leach was still bowling at the other end and runs, for a long period, from Pakistan side were coming unilaterally as Rizwan did not look in the mood to get off the nought just yet. The Run rate fell and dot balls became frequent. Not that they were not frequent before but recovery with boundaries followed at that time.

Wood replaced Leach in the 40th over and runs were being hit from Saud’s bat only who survived a close LBW call during Wood’s over. The on field umpire shook his head and the English Captain decided to get it reviewed only for it to end as Umpire’s call. Review was retained and so was Saud’s wicket. Leach came back to attack again but Rizwan stayed at 0.

Mark Wood was given the ball again and finally Rizwan decided to get off the mark with a boundary, which gave Saud a push to who hit a boundary in the next over as well off Leach. However, Leach reprimanded him immediately by getting his timber the very next ball. Things started getting tense for Pakistan as their only run-getter as of then was sent back.

Salman Agha came striding in next with Wood on one end and the Spinner Jack Leach on the other. Rizwan went into dormancy again and on was Pakistan’s defensive mode turned. Rizwan hit Leach for a boundary again who did the same to him the very next ball, what he did to Saud Shakeel; punished Rizwan with a beautiful ball which crashed into the upper part of the middle and off side timber. Mohammad Nawaz was sent to bat now just to come back again after 9 deliveries when he tried to hit the ball but landed it into the hands of Ollie Robinson standing at mid off.

Nawaz was followed by Agha Salman who was dismissed by the newly brought in man, Joe Root, after Ben Stokes took a comfortable catch. A collapse for Pakistan who still had a trail of more than 100.

During the same over, the new man in, Mohammad Ali got an outside edge and was caught at the slip by the Opener Crawley. For only 11 runs, 5 Pakistan timbers fell. Pakistan were 169/8 after the 53rd ended. Only 27 runs after Babar’s dismissal were made and many wickets fell.

The 9th one fell in the 56th over, when Zahid Mehmood was dismissed by Mark Wood following a plumb LBW. A little aggression by Faheem Ashraf and the 11th number batter Abrar Ahmed steered Pakistan above 200 but were hampered at 202 by Mark Wood who got his second strike after Ben Duckett caught Faheem Ashraf at deep backward square. Pakistan’s innings ended following a quick collapse with England taking a 79 runs lead.

The English openers were forced to get their kit on and return to the crease to bat once again. Crawley was at the crease and Mohammad Ali ran in to bowl the first over. 3 runs from the first one gave England to a rather slow start than what Bazball would have wanted. From the other end, Faheem Ashraf was asked to bowl by Babar who wanted to let pacers use whatever little swing the ground offered before introducing the spinners. A maiden by Faheem was followed by two fours in Ali’s overs by Ben Duckett. His counterpart, Zak Crawley, was run out in the next over by no one other than Abrar Ahmed, the Harry Potter of the team, who threw the ball for a direct-hit. Will Jacks was sent early, Ollie Pope moved up the order.At the end of 5 overs England were 15/1 and in the 7th over Abrar Ahmed, the man of the first innings, was asked to bowl. Ahmed, carrying his momentum from the yester innings, ended his first over with a strike. Will Jacks was the victim and Googly was the magician’s weapon.

Joe Root came but Duckett was to face the bowler in the next over. The run rate by the end of 9 overs sat at 3.22, the attacking approach of English was rested for a while. Duckett, however, did not stop no matter what happened. His boundaries from time to time kept the run rate stay above 3, Joe Root however remained calm for a while.

Mohammad Ali and Abrar Ahmed with the bowl had runs under control, Pakistan was not minding seldom boundaries.

Mohammad Nawaz came in to bowl his first over after 15 overs were completed. At this point England stood at 53 with the loss of 2 wickets. Nawaz went a little expensive and conceded 10 runs, while Abrar contained runs from his end. A breakthrough was needed at this point, England were at 73 after 19 overs.

Ben Duckett completed his 50 and in the very next over Joe Root decided to sweep Abrar Ahmed’s delivery, doing which he failed but Abdullah Shafique standing at short leg did not. If anything, Shafique did more than what was expected of him and took an absolute blinder to send Root back. The fall of Root’s wicket silenced England for a while. Harry Brook came in next. Before going for the tea break, England has 89 runs on the board at the expense of 3 wickets.

Nawaz, who bowled economically after his first two overs, continued to bowl after the Tea as well. Zahid, however, replaced Abrar after one over, who was brought in again in the place of Mohammad Nawaz. The runs continued to flow at more than 3.5 overs for a while. Singles and doubles were being used to keep the scorecard changing, boundaries became more infrequent.

Abrar Ahmed was hit for a maximum and a four on consecutive balls by Harry Brook which, paired with an 8 run over from Zahid, brought the Run rate a lick above 4. The mystery spinner in his next over decided to get things under control and bowled Ben Duckett out. Completing his 10 wickets in this game. Ollie Pope finally came in to bat and Harry Brook with 40 runs next to his name welcomed him. However, before Brook could even reach his 50, Pope walked back after Mohammad Rizwan and Mohammad Nawaz ran him out.

The Skipper, Stokes, came himself this time. England were 155/5 by the end of the 38th over, Abrar and Zahid still splitting the bowling duties between themselves. Brook completed his 50 while Stokes took some balls to get used to the pitch.

In the next few over, Brook increased the frequency of boundaries and the run rate surged above 4. Mohammad Ali returned after the 46th over.

Umpires were checking the light again and again but the signal of ending the day did not come. The lead was 280 by now and Agha Salman was told by Babar to bowl the 49th. 49th and the last over, since Umpires could not take it any more and bails were removed. Day 2 ended, with the English dominating a good part of it. 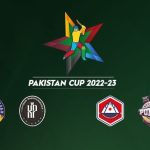 Squads and Schedule for Pakistan Cup announced
Next Article 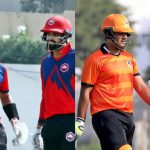