ICC releases the list of the Player of the Month nominees for November:

Earlier on Tuesday, International Cricket Council released the list of this month’s contender for the Player of the Month Award. 6 players from both men and women’s teams have been shortlisted for it, out of which 2 are Pakistani. Let’s have a look at who ended up in the governing body’s nominee list.

PLAYER OF THE MONTH:

From men’s teams, 3 players were selected on the basis of their performance in the month of November. Two players from the T20 World cup winning team, England, were selected while Pakistan’s ace pacer made it to the list as well.

English World cup lifting captain Jos Buttler has been made a part of the list because of his thunderous performance in the recently concluded T20 marquee event. The wicket-keeper batsman failed to perform in his team’s first two encounters, against Ireland and Afghanistan. However, in his 3rd match into the tournament, the English captain hit a purple patch and began thrashing the opposition bowlers. He scored an unbeaten 80 runs off 49 balls, his highest in the tournament, against India to help his team clean sweep the men in blue in the semi-finals. Although he departed early in the final game against Pakistan, his quickfire 26 off 17 did irreversible damage to Pakistan’s prospects of winning the game. In total, Buttler scored 207 runs in four matches he played in the month of November.

Like his Skipper, Rashid did not get a desirable start. In fact, the spinner remained wicketless and conceded runs at an economy rate of more than 6 runs per over in the first three matches. The game against Sri Lanka, 4th World cup game for the tweaker, in the Super12 round proved to be a turning point for him where he took the important wicket of the dangerman Pathum Nissanka and conceded only 16 runs in 4 overs. The right-hander carried his performance in the next two outings, against India and Pakistan, as well. In the match against India he trapped India’s aggressor Suryakumar Yadav to send him home and also gave runs at only 5 runs per over in his 4 over spell. Against Pakistan in the final he was ruthless as he notched up key wickets of Babar Azam and Mohammad Haris and broke the backbone of Pakistan’s batting.

Pakistan’s falcon, Shaheen Shah Afridi, made a return to take the charge of the team’s pace attack after being out of the squad due to his knee injury. However, the apex predator of men in green took only two matches to get back into his form and started wreaking havoc in the opposition’s batting lineup. The left-armer took 10 timbers in the month of November, including a 4-wicket haul against Bangladesh. As has now become a second nature to him, Shaheen is known for his habit of striking in the first over. Players like Alex Hales, Quinton de Cock, Kane Williamson, Finn Allen and Litton Das became his victims in November. His injury in the final was one of the few things that threw the final game out of the green team’s reach, but in that game too he tried his best to deliver for his team.

To cast your vote, please visit the following link: 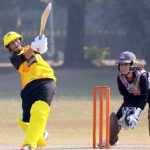 Iram, Nahida star in Strikers and Dynamites wins
Next Article 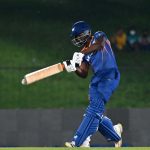