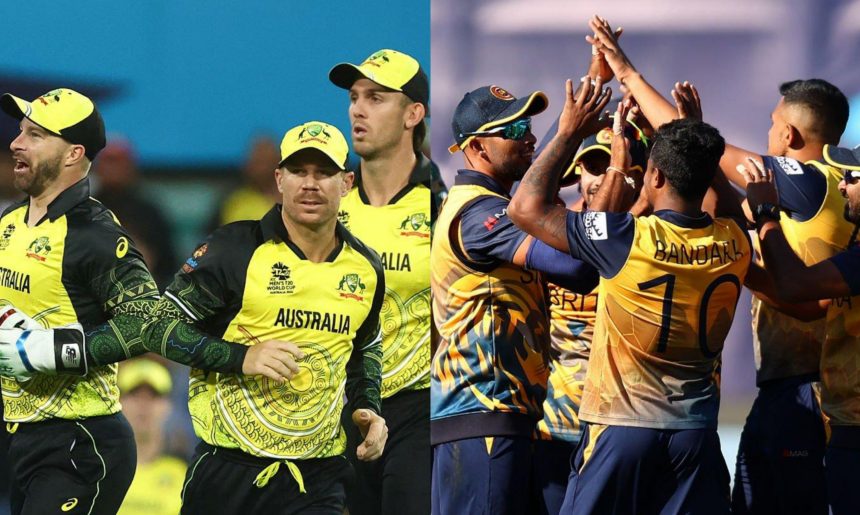 Contents
HEAD TO HEAD: WEATHER AND PITCH CONDITIONS:PLAYING XI (PROBABLE):PREDICTION: WHERE TO WATCH:

The host side Australia is set to meet Sri Lanka in their second match of the marquee event at Perth Stadium. Both teams, however, are eyeing several possibilities to make it to the semis.

Australia, who suffered a major defeat at the hands of Kiwis in the opening match, are in dire need of winning the next matches. Currently, Australia sits at the bottom of the table with an NRR of -4.450. The host side will have to make the victory over Sri Lanka certain to better their prospects of reaching the Semi-finals.

Earlier, the Sri Lankan pacers Dushmantha Chameera and Dilshan Madhushanaka were ruled out of the World cup, giving a huge blow to the Islanders. The injury wave did not stop here as it took the in-form batter Pathum Nissanka and top-order batter Danushka Gunathilaka in its wake as well. However, Nissanka’s injury is a minor one and after he clears fitness tests, he will be available to play against Australia. Even with a huge number of injuries, the Shanaka-led men were able to supersede the Irish team in the opening match. In contrast to Australia, Sri Lanka sits at second place in the table.

The Asian champions and the defending champions of the T20 World cup have encountered each other on 25 occasions in T20Is. Out of which the Aussies have come out victorious 15 times and Sri Lanka has won 10 matches. Both teams have played against each four times in T20 World cups, with Australia winning 3 times.

The weather in Perth will remain mostly sunny, with in between episodes of clouds taking over the sky. The chance of rain, however, is only 20%. Winds are expected as well. All in all, the weather will remain pleasant for an eventful match.

The scenic ground in Perth, the Optus Stadium, has a batting-friendly pitch with extra bounce to assist the shots played by batters. Flat pitch and quick outfield are the factors that make this pitch a batsman’s favourite. We can expect a high-scoring match here.

few weeks ago, England and Australia scored a combined total of 408 runs here. With the average total being 160, for the side batting first, a high scoring match will not be an exception here. Pacers will be extremely useful here owing to the bounce it offers. Shot deliveries will be a bowler’s best friend on a pitch like this. However, before the pitch flattens out the bowlers will need to send the key players back to the pavilion.

The host side need to be victorious in the remaining matches to reach the semi finals. Finch-led side has a brilliant batting lineup and their pacers stand second to no one. The strength of Sri Lanka’s batting lies in the top-order. Early departures of their premium batsmen can create trouble for Sri Lanka. This along with possible absence of Pathum Nissanka is a chance Australian pacers will not want to let go in vain.

Further, the bowling attack, especially the pace lineup of the injury-laden Sri Lanka, is not very impressive and spinners will not be favoured by the pitch much. This can be a cause of problem for Shanaka-led men as well.

Keeping this scenario in mind, the hurt beast Australia will be the favourites for tomorrow’s match. 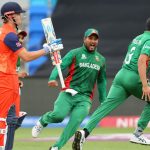 Bangladesh escape with a narrow win over Netherlands
Next Article 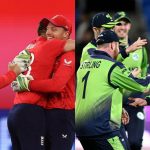